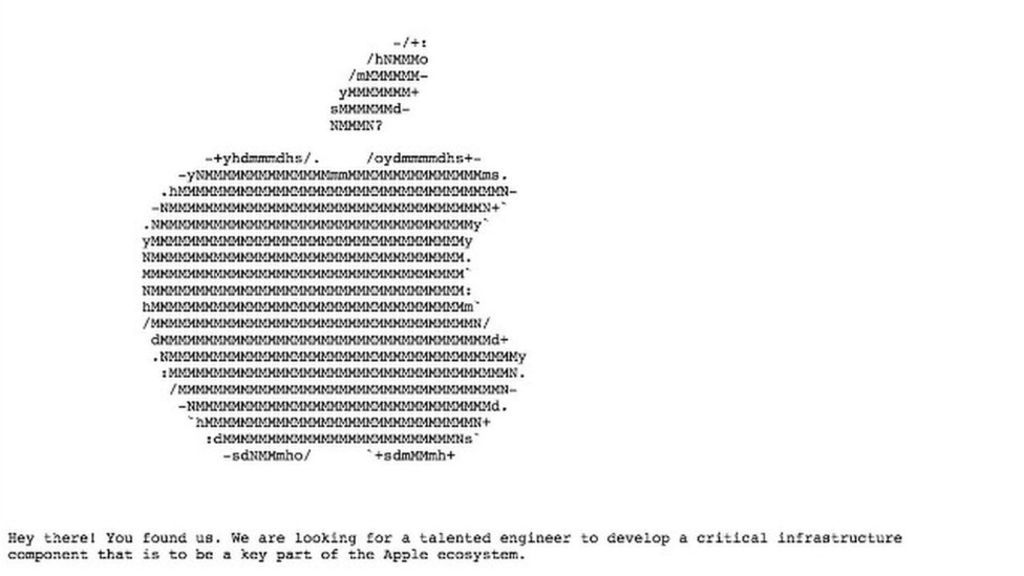 An advert for an engineer at Apple has been found hidden in the tech giant’s website.

The text begins: “Hey there! You found us”, and says the firm is looking for “a talented engineer to develop a critical infrastructure component”.

It has since been either removed or moved elsewhere.

Cyber-security reporter Zack Whittaker discovered it by chance while analysing some data being sent from iPhone apps – but he is not applying for the job.

“As part of the stream of traffic I could see, it was connecting to this one URL – and there it was,” he said.

The page was listed under the web address “us-east-1.blobstore.apple.com” – which now contains an error message.

“Blobstore” is the name of a series of servers that belong to Apple.

Apple has been contacted by the BBC.

Mr Whittaker, who is cyber-security editor at tech news website CNet, said he was excited by his discovery.

“It’s remarkable to see these companies taking innovative ways to entice people to work for them,” he said.

“A lot of times finding a job is down to chance and luck. This definitely keeps things interesting.”

Key qualifications required for the position include familiarity with modern server technology and distributed systems.

Mr Whittaker added that he did not apply for the job.

“Apple is not looking for me,” he said.

The use of “hidden” messages in recruitment campaigns has a long history.

In 2016, British firm Dyson devised a series of four challenges, beginning with a key hidden inside a YouTube video.

And in 2015, GCHQ spray-painted cryptic graffiti on the pavements of various UK cities as part of its recruitment campaign. The department has also used online quizzes.

In the same year, former Google engineer Max Rosett wrote an article describing how after searching for a series of programming terms while seeking a career change, a box appeared in Google’s search results asking if he was “up for a challenge”. This led to a series of problems to solve – and eventually a job with the firm.

“One of the most important skills as an engineer, and especially a cyber-security specialist, is a mindset that can solve problems,” said Prof Alan Woodward from Surrey University.

“Puzzles are a great way to discover that. Technical skills can be taught.”