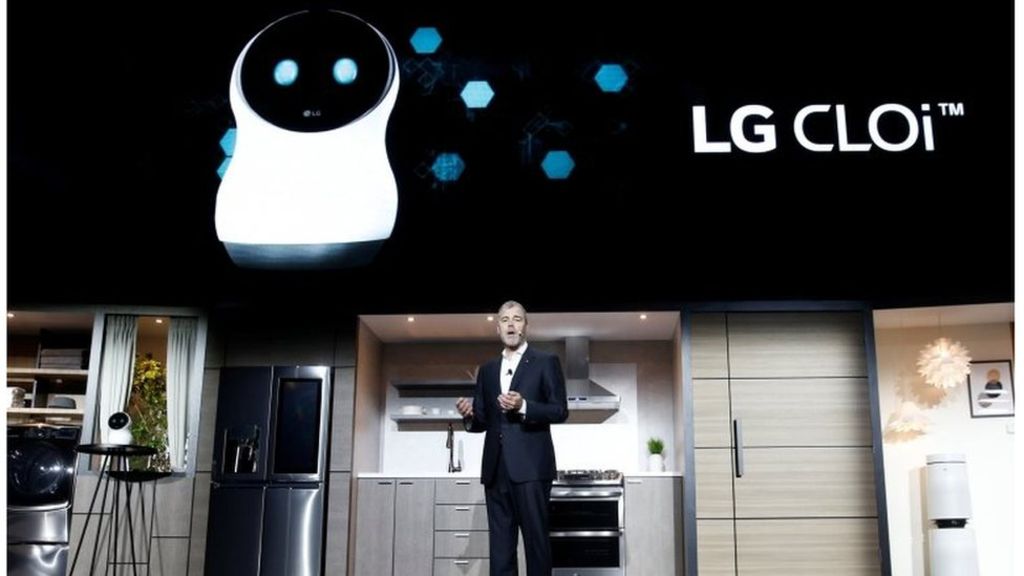 A robot created by LG to help users control their smart home repeatedly failed on stage at its CES debut.

Cloi was meant to be the centrepiece of the South Korean firm’s presentation where it was supposed to show how new artificial intelligence tech could enhance use of kitchen appliances.

Instead it gave no response to three consecutive commands beyond blinking.

Experts say the demo represented a “disastrous” debut for the bot, which was mocked on social media.

The event was the first press conference of the morning at the Las Vegas tech fair. Samsung, Intel, HTC and Sony are among other big companies scheduled to unveil products over the course of the day.

LG’s focus this year was to promote ThinQ, its in-house AI software, which it intends to roll out across various products to make them easier to use and capable of “evolving” to meet customers’ needs.

Although LG also includes Google’s Assistant in some of its latest TVs and smart speakers, it has chosen to rely on its own solution for its robots.

The firm already has robots in use in South Korean shopping centres and airports, and also makes robotic vacuums for the home.

But Cloi – which is pronounced Kloh-ee – represents a push to put the technology at the heart of consumers’ homes.

The machine was described as being the “ultimate in simplicity when managing your smart home,” when it was presented on stage by David VanderWaal, LG’s US marketing chief.

And it initially behaved as planned when he asked it for his schedule.

But subsequent requests to find out if his washing was ready, what was planned for dinner and what recipes it could suggest for chicken all fell flat.

“The first time it failed everyone laughed and thought it was just a glitch,” commented Ben Wood, an analyst at CCS Insight, who was in the audience.

“The second time, there was a realisation that something was wrong.

“And when it failed again, there was a stunned silence in the audience and then a bit of hubbub as people felt sorry for this guy.”

Although it is far from the first time a CES demo has gone awry, Mr Wood said it highlighted a problem with many of the AI-based technologies being pitched to the public.

“It will be damaging to LG and highlights a broader point about all the companies exhibiting here: is their technology really ready for prime time?”

However, by this point many viewers of the firm’s YouTube livestream were more preoccupied by making jokes about Cloi’s earlier appearance.

One suggested that she was a feminist who did not enjoy being bossed about in the kitchen, while another posted: “RIP Cloi﻿ 2018-2018”.

One industry-watcher said LG was likely to take a short-term hit to its brand as a result of the event, but said that it would also serve as a reminder that the promise of a “seamless” smart home was still some way off.

“The target market for these kinds of products is still hi-tech-friendly early adopters who are willing to put in more effort than the regular user,” said Tuong Nguyen from the consultancy Gartner.

“But even for early adopters, it tends to be a little more work than expected.

“The challenge for manufacturers is that they not only to offer a good user experience but also have to get all the different technologies involved to work together.

“An analogy would be that it’s less like taking one child to the zoo than having to chaperone a whole class.”