Reported losses due to internet crime last year totaled $1.3 billion, according to the FBI’s Internet Complaint Center, or IC3. 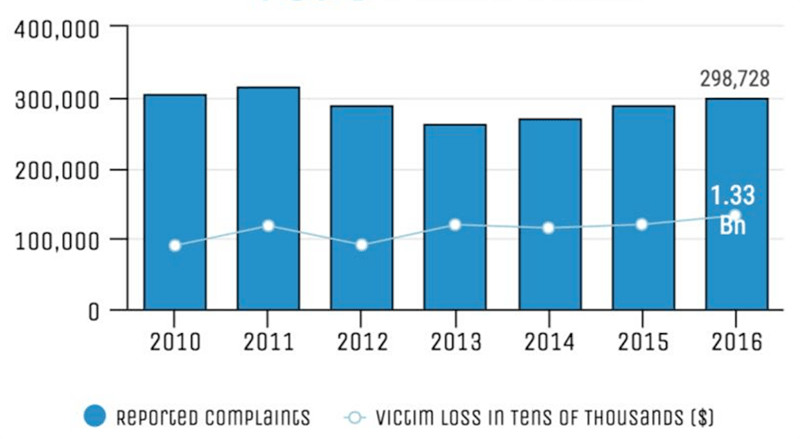 How the number of complaints reported to IC3 – and count of affected victims – has changed from 2010 to 2016.

The findings, however, include a big caveat, in that the Department of Justice estimates that only 15 percent of internet-related crime gets reported to authorities (see FBI to Ransomware Victims: Please Come Forward).

To help respond to such crime, the FBI says it’s been continuing Operation Wellspring, which Smith describes as “an initiative through which state and local law enforcement officers are embedded in, and trained by, FBI cyber task forces and serve as the primary case agents on internet-facilitated criminal investigations.”

Internet-enabled crime does not occur exclusively online. In the case of tech-support fraud, for example, the FBI says such schemes can involve a cold call, a pop-up window or locked screen on a PC, criminals using search engine optimization techniques to ensure their organization appears at the top of “technical support” search results, or URL hijacking or “typo-squatting,” involving registering websites in the names of companies that look legitimate.

“The IC3 has received thousands of tech-support-related fraud complaints,” according to the report. “While the majority of tech-support fraud victims are from the U.S., the fraud was reported by victims in 78 different countries.”

One increasingly seen variation of this attack involves criminals contacting victims and offering a refund for overpayment, then requesting access to the victim’s PC to help them log into their online bank account and process the transaction. The FBI says the “support provider” will “mistakenly” transfer too much, and then transfer the supposedly excess amount back, while in reality attempting to drain the victim’s bank account.

Attempts to psychologically compel victims into paying attackers also continue, albeit with an increasingly online twist.

Some of the top types of extortion reported to the FBI in 2016 included the following six schemes, often designed to elicit a payment from victims:

The bureau says IC3 received 17,146 extortion-related complaints with adjusted losses of over $15 million in 2016. It notes that extortionists are increasingly tapping virtual currency to attempt to make their efforts – and identities – tougher to trace.

Here is a selection of some of the top attacks logged by IC3, including 2016 losses.