Fortnite: A fortnight in my 40s in Battle Royale

Gigacycle > Technology News  > Fortnite: A fortnight in my 40s in Battle Royale 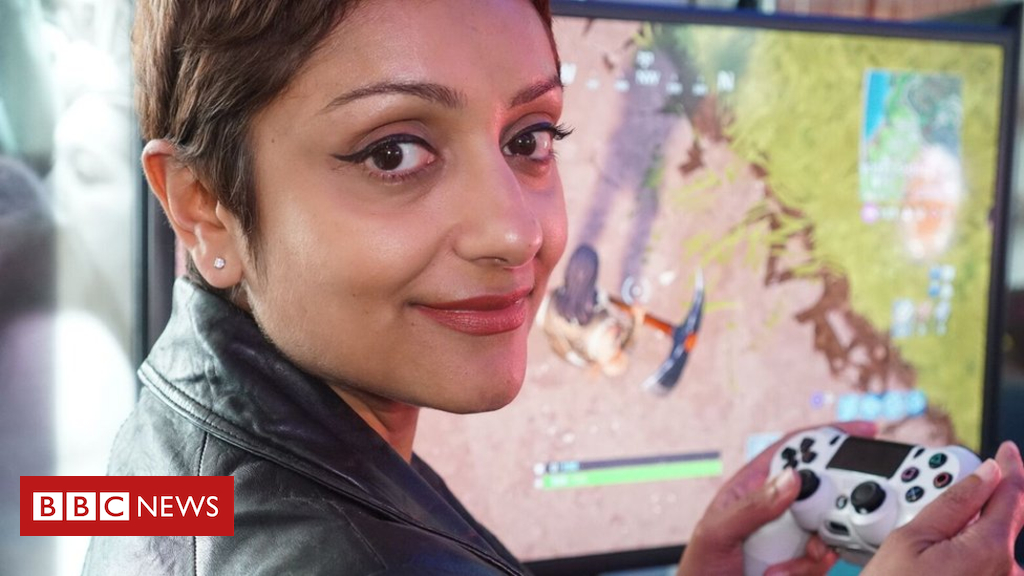 Fortnite: A fortnight in my 40s in Battle Royale

I leap from the battle bus and land in the middle of what appears to be a deserted island, carrying only a pickaxe as a weapon. As I start running, I hear the sound of gunshots in the distance. Almost immediately I’m dodging bullets and suddenly I’m dead – shot by one of the other 99 players on the island.

I’m playing Fortnite, the video game phenomenon. According to developer Epic Games, more than 125 million other players are also in its grip.

It’s the first time I’ve properly dedicated myself to a game since Tomb Raider in the 1990s, when I was a 20-something rather than the 40-something I am today.

Battle Royale is Fortnite’s most popular mode. One hundred of us collect weapons, build defences and track each other down until there is only one person left alive. And every few minutes, the map shrinks.

I launched straight into my first game with little preparation, on a smartphone.

At first, I found it hard to work out what I was supposed to be doing and my not-so-great eyesight struggled with the small screen.

After a few minutes, I gave up and downloaded the game on my iPad and later on my PC.

Although the bigger displays helped, I did not last long.

During my first few attempts, players would appear out of nowhere and kill me in an instant – leaving me frustrated that I hadn’t even noticed them approaching.

After a few games on the tablet, I worked out that I had to hunt for better weapons – and I needed to collect materials to build forts to protect myself.

It wasn’t until I played on a console belonging to a friend’s teen son that I really felt like I got into my stride.

Using the Xbox controller, I could more easily pick up the weapons I found on the map, which I had often missed while playing on the tablet.

On the large TV screen, I could also get a better sense of where the other players were – and what they were doing.

And I was given some expert coaching from 14-year-old Archie, the son of another friend.

“It’s easier for me to navigate having a [console] controller than using a PC mouse or keyboard,” he told me.

Although he added that Ninja – Fortnite’s top Twitch streamer – played on PC.

Even as I collected better weapons, I was lucky if I managed to survive beyond the final 60 before being eliminated by a more experienced player with better skills and weapons.

But it was easy to understand Fortnite’s appeal.

I felt compelled to try to improve on my position and survive for longer.

I found myself picking up the tablet while watching TV, to launch into a quick game.

Before I knew it, I had spent an hour playing.

Once you’re eliminated, you can choose to watch the person who beat you, to see how they progress in the rest of the game.

Many of the players have spent money on in-app purchases such as “skins” that change the appearance of a character and “emotes” that let characters perform ridiculous dance routines.

When I was killed by a jester who then danced a jig, I was less than impressed.

I’m not ashamed to say I’m a hider. My player strategy consisted of trying to avoid other players.

If I saw someone nearby, I would run and hide in one of the many bushes or buildings.

My sophisticated strategy is unlikely to lead me to victory – I have never survived beyond the final 17 players.

Archie said he had won 10 games out of about 200 and played against his school friends online. “You get a real buzz with a Victory Royale,” he told me.

I certainly don’t think I’m ever going to be good enough to win. But I keep dipping into the game to try to beat my record of 17th place.

Each time I’m eliminated by some stealthy player who catches me unaware and shoots me in the back, I find myself shouting in frustration.

I just do not see them coming and each time my reaction is the same – a groan.

I’ve already lost count of how many games I’ve played so far.

Some parents think their children are addicted to the game and would happily spend all their time playing it.

Ruth Kieran told me her two sons, aged 11 and nine, played online when they got home from school.

“They would spend 24/7 playing Fortnite if they were allowed to,” she said.

“We try and limit our boys to just one hour in the evening after school and a couple of hours at the weekend.

“But it is really hard when they are playing against friends [whose] parents are not as restrictive.”

I’m not sure Mrs Kieran would be too impressed with how quickly I’ve managed to succumb to the game – and I’m not even playing against anybody I know.

Some experts say parents do need to take more responsibility.

“There are some parents out there who use screen time as a babysitting aid,” said Prof Mark Griffiths, a psychologist and director of the International Gaming Research Unit.

However, he added that computer games were not necessarily bad news.

“When parents contact me complaining about their children spending too much time playing computer games, I ask them, ‘Has gaming interfered with their education or chores or are they not being physically active?’

“When they answer, ‘No,’ I tell them that it is normal and they need to stop worrying.”

Archie suggested playing Fortnite was “like a virtual play date”.

“Parents don’t need to worry where their kids are, because they are at home playing online with their friends,” he said.

As my two-week experiment of playing Fortnite was about to end, I spoke to my 10-year-old nephew.

He had downloaded the game to his tablet the night before, to his mother’s dismay.

She said he had come home from school pleading to be allowed to play Fortnite, because all of his friends were playing it too, despite it not being recommend for under-12s.

I definitely scored a few “cool auntie” points when I told him about my experiences on the island.

But when my “sensible adult” mode kicked in and I warned him not to spend his money on in-app purchases to customise his avatar, he said all his friends had skins.

I don’t think I’ll be getting into any Fortnite battles with my nephew or any of the other school-age children of any of my friends, who found the idea of me playing Fortnite highly amusing.

But to be honest, it is likely I will go home this evening and play another game or two.