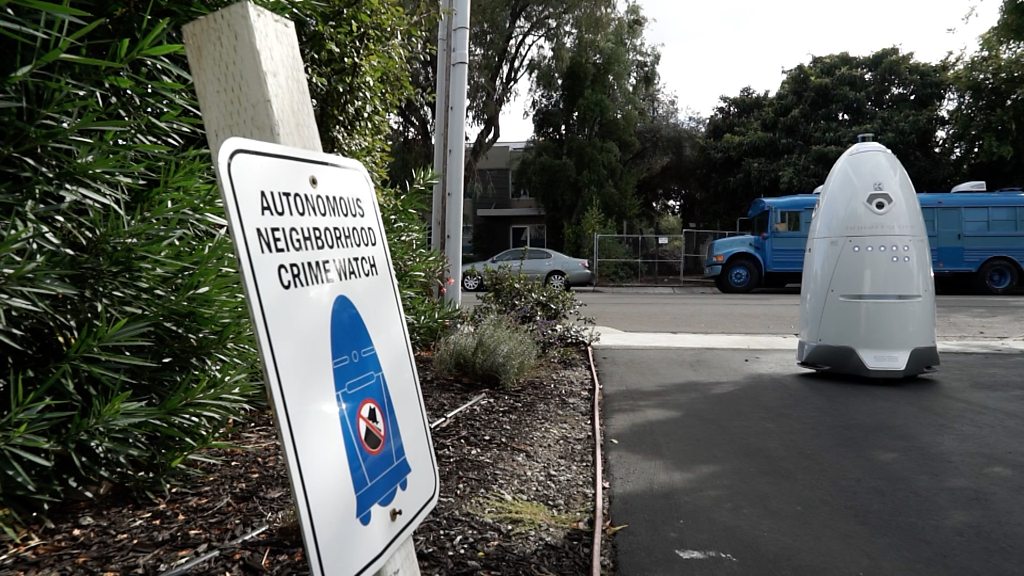 It is a terrifying vision of the future – a robot police officer with dark eyes and no discernible mouth that can identify criminals and collect evidence.

The robocop, complete with police hat to give it that eerie uncanny valley feel, was shown off outside the world’s tallest tower, Burj Khalifa, in Dubai, last June.

But since then what has it done? And is Dubai’s love affair with robotics any more than just PR for a country desperate to be at the cutting edge of technology?

PAL Robotics, the company behind the robot, threw some light on its duties, which seemed more tourist guide than police officer.

“This robot joined the Dubai police to help citizens in an innovative and engaging way, and it is located by now in tourist attractions and shopping malls,” the company told the BBC.

“The robot can provide useful information in multiple languages thanks to its software, and can also guide people to a requested point of interest.

“Besides, it is a tool for citizens to contact the Dubai Police call centres by using the microphones integrated into the robot, and people can use other police-related services through it, such as paying traffic fines.”

The robot is part of a wider move to make the region’s police service “smarter”, which will include many more computer-controlled, unstaffed police stations. The Dubai government wants robot police to make up 25% of the force by 2030.

As a member of the Dubai police told the BBC when it was launched: “These kind of robots can work 24/7. They won’t ask you for leave, sick leave or maternity leave. It can work around the clock.”

Noel Sharkey, a professor of computer science at Sheffield University has worked with the Dubai government on its integration of bots.

He told the BBC: “These robots were originally planned in Dubai to help the elderly or as tour guides.”

He is not convinced by the current policing role.

“I think there was a plan to have an emergency button, which would send your location to the police, and that could be a good application – but people could just make fun of them or knock them over.”

There is precedent for this. In July 2017, a security robot used to patrol an office building in Washington was found “drowned” in a fountain.

While police robots might currently be rudimentary, Prof Sharkey predicts they will become “more intense” in coming years, taking on the role of surveillance bots or as machines to sniff out explosives or other dangerous materials on the streets.

In China, which is already building what it calls the world’s biggest camera surveillance network, robots are now being rolled out at numerous train stations and airports.

The robot is equipped with a series of cameras and has, according to reports, already used its on-board sensors to detect a small fire.

It can also recognise faces, which lets it “track and follow potential criminals or suspicious people”, according to Mashable.

According to Chinese publication the People’s Daily, it is also, rather alarmingly, armed with an “electrically charged riot control tool”.

China is leading the drone revolution. And it is here that many see robots playing the biggest urban roles, offering alternative ways to deliver goods and even providing autonomous taxi services.

Dubai has trialled unmanned taxi drones and plans to roll out a hybrid hover-bike that would allow the police to reach emergencies more quickly.

Prof Sharkey is not convinced by the sky-high robot revolution.

“The skies over Dubai could become uncomfortably crowded very quickly,” he said.

“The ground level of the city could become a dark place of intrigue and mystery like Blade Runner.”

But Prof Sharkey believes the rise of the city robot is inevitable.

“I can see lots of roles for robots in cities,” he said.

“They will be cleaning, inspecting buildings and delivering things.

“But right now they are expensive and they break a lot.”

Some believe that within a decade the skies above cities could be full of flying robots, not just delivering parcels but also helping maintain urban infrastructure.

Research fellow Bilal Kaddouh is part of a team at the University of Leeds designing a fleet of drones that can repair potholes in roads.

“We have a fleet of three drones; one conducts inspections of the roads, another digs and prepares the road, and a third, with a 3D printer on board, can repair it,” he said.

The team expects to have a working prototype of the system ready this year.

Dr Kaddouh hopes one day autonomous drones will be widely used in the construction industry, able to report more exactly what the problems it finds are rather than just “sending back a flood of data” as they currently do.

He envisages a time when cities will be full of drones maintaining infrastructure.

“Imagine a drone that can land on a high structure and with a robotic arm repair it or change a bulb in a lamppost or install a new communications unit in a communication tower.”

Such robots would eliminate the need for workers to put themselves at risk, as well as helping to make a city run more efficiently, he said, but there were barriers.

“People don’t like drones buzzing about day and night, and it is also hard to integrate drones into existing airspace.

“The technology is there, but it is now a question of whether regulation and public perception can change.”