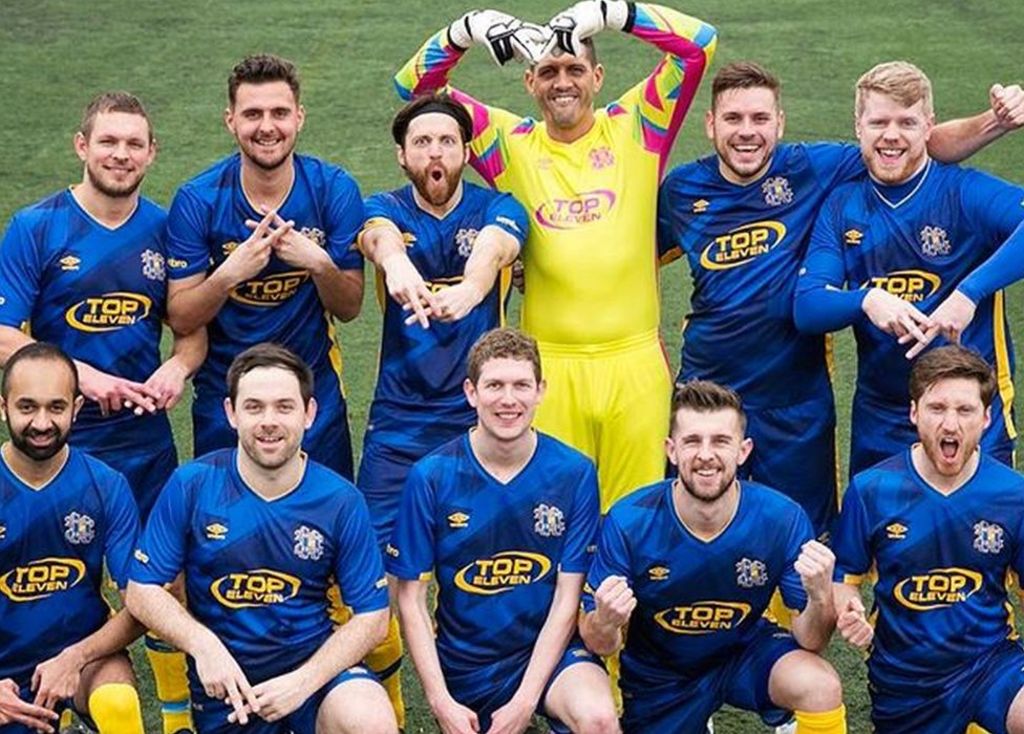 The squad is a group of mates, most of whom have day jobs off the pitch which have nothing to do with sport.

And yet they have toured the US, Serbia, Ireland and Jersey, had their own kit custom-made by sportswear giant Umbro and average 700,000 views per match.

They’ve also played at the UK’s top stadiums including Wembley and the Etihad, as well as the O2 Arena and Everton’s training ground.

And it’s all thanks to a carefully crafted presence on YouTube.

Crucially, the team didn’t start life as total unknowns. Captain Spencer Owen was already a successful football and gaming YouTuber in his own right, and now has nearly two million followers.

“He has always wanted to own his own football club,” says Seb Carmichael-Brown, who is also Spencer’s brother.

“But it’s not viable for a 28-year-old YouTuber. So we thought, let’s start his own.”

Sunday league activity already has an established YouTube presence – like the Palmers FC team, who have 200,000 followers – so the brothers decided to build something a bit different.

Inspired by EA video game franchise Fifa, they devised a tournament in which the team would play real matches within a fictional league, working their way from fifth to first division, where they are currently. They are promoted or relegated depending on a points system dictated by match wins – their current target is to reach 22 points in order to top their own first division.

This way, Hashtag United can choose their opponents, and include teams from other big YouTube channels like Copa90 and the F2Freestylers as well as sponsored teams.

It also secures occasional access to the big stadiums – sometimes through sponsored deals with, say, BT Sport, and sometimes because they play a team connected to a particularly hallowed arena. So, for example, a match against Arsenal community team Arsenal For All got them on to the pitch of the Emirates Stadium.

The team post a match video every two weeks but the channel is peppered with behind-the-scenes videos, fronted by Spencer, showing them travelling, setting up, chatting about forthcoming events among themselves.

A six-person camera crew attends matches, and it takes four to five weeks for a tightly edited match video to find its way on to the official channels.

It costs “thousands” to put on a match in this way, says Mr Carmichael-Brown. Although sponsorship is lucrative – the team’s US tour was paid for by Coca-Cola – overheads are also large.

“This is a classic example of keeping it real and personal – talk to your fans like you would talk to your mates. It’s all about trust these days. Younger people don’t like big faceless corporates, they want a more personal, more authentic experience.”

In addition to successful memorabilia and merchandise marketing (the current strip is sold out, says Mr Carmichael-Brown), Hashtag ran an X Factor-style search for a new player, which attracted 20,000 applicants, they claim, and has resulted in a couple of signings.

The north London ground which the Hashtag football team call their regular home only has the capacity for 1,000 spectators, and the team try hard to keep match dates under wraps.

“We are primarily making videos for YouTube rather than creating live events,” says Mr Carmichael-Brown.

“A lot of our games go out four to five weeks later. If we have a big crowd, they’ll all have their phones, and the results will leak.”

However, people do try to figure out the venue, he admits, and will turn up on the off-chance that they might catch Hashtag United in action.

“We have recently thought about ways we might move towards a model where all the games are open,” he said.

Perhaps that will form part of the next chapter in the life of Hashtag United – planning is well under way as the team races to the top of its self-created Division One.

Mr Carmichael-Brown is tight-lipped but says the announcement will be made “in the coming months”.

Joined: three months ago, via the Academy series

Joined: at the start

Joined: at the start.

“It’ll be hugely important for them to stay real – in other words stay true to their roots and not end up in the elite player position of being spoilt by money,” said Sue Llewellyn.

“They will also need to be agile in such a fast-moving space, keep innovating and finding new ways to engage their fans.”

That said, social media and sport are a natural partnership, she adds.

“Sports fans are passionate about their game. It’s a basic human need to belong and to want to feel we matter.

“Being part of a digital tribe fulfils that need and it brings people together wherever they are in the world and whatever physical skill level they have.”